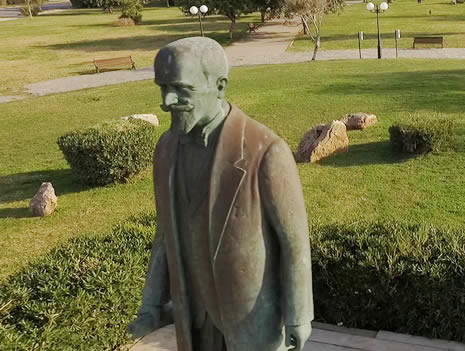 Eleftherios Kyriakou Venizelos (full name Elefthιrios Kyriαkou Venizιlos, [23 August 1864[1] – 18 March 1936] was an eminent leader of the Greek national liberation movement and a charismatic statesman of the early 20th century, remembered for his promotion of liberal-democratic policies.
As leader of the Liberal Party, he was elected several times, in total eight, as the Prime Minister of Greece, serving from 1910 to 1920 and from 1928 to 1933. Venizelos had such profound influence on the internal and external affairs of Greece that he is credited with being "the maker of modern Greece", and is still widely known as the "Ethnarch".
His first appearance in the international scene was with his significant role in the autonomy of the Cretan State and later in the union of Crete with Greece. Soon, he was invited to Greece to resolve the political deadlock and became the country's Prime Minister.
Not only did he initiate constitutional and economic reforms that set the basis for the modernization of Greek society, but also reorganized both army and navy in preparation for future conflicts. Before the Balkan Wars of 1912–1913, Venizelos' catalytic role helped Greece enter the Balkan League, an alliance of the Balkan states against Ottoman Empire.
Through his diplomatic acumen, Greece doubled its area and population with the liberation of Macedonia, Epirus, and most of the Aegean islands.
In World War I (1914–1918), he secured Greece's alliance with the entent, further expanding its borders. However, his pro-entent foreign policy brought him into direct conflict with the central-powers-allied monarchy, causing the National Schism.
The Schism polarized the population between the royalists and Venizelists and the struggle for power between the two groups affected greece's political and social life for decades. Following entent's victory, Venizelos secured new territorial gains, especially in Anatolia, coming close to realizing the Megali Idea. Despite his achievements, he was defeated in the 1920 General Election, which contributed to the eventual Greek defeat in the Greco-Turkish War (1919–22). Venizelos, in self-imposed exile, represented Greece in the negotiations that led to the signing of the Treaty of Lausanne, and the agreement of a mutual exchange of populations between Greece and Turkey.