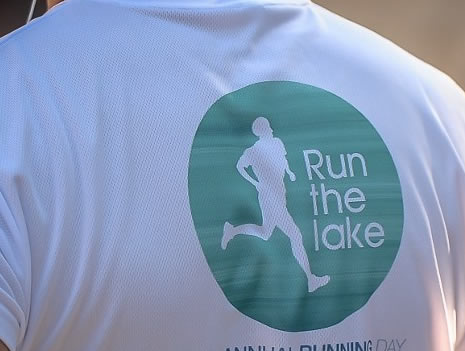 Run the Lake Road
The Run the Lake race is now a sporting event in the Municipality of Vari Voula Vouliagmeni.
Each year the number of entries ranges from about 2,000 to 3,000 people and takes place on the most beautiful route in the country, in Vouliagmeni

The race is charitable-social in nature, combining noble emulation and selfless
It is a race of offer and solidarity, in which runners run from the heart, and where sports and naturalistic action is combined with the provision of financial and material assistance to institutions and bodies of our region.

Profits from contributions from participations and sponsorships will be made available to institutions and bodies to meet their needs
The race which takes place in mid-December is co-organization of the Organization of Sports Culture & Children's Education of the Municipality of Vari-Voula-Vouliagmeni and the Association of Runners of the Southern Suburbs of Attica Evcles, with the support of the Hellenic Federation of Associations of People's Mass Sports (EOSLMAY).


Communication.
http://www.runthelake.gr/
Tel. (+30) 2132020714
This email address is being protected from spambots. You need JavaScript enabled to view it.

December
Cost is announced at: http://www.runthelake.gr/

The event of the revival of the Historical "Voula Ascent", in the famous "Hanging Hare".

It is under the auspices of the Municipality of Vari Voula Vouliagmeni and is organized by the Association of Owners of Collectible Cars.

It is organized in the form of rally sprint regularity, a mild form of "race", which promotes road safety and respects the environment and local residents, while participants compete on the same special precision route three times.

Eligible to participate are selected historic cars, while there are competitors whose name is connected with the legend of the "Hanged Hare". 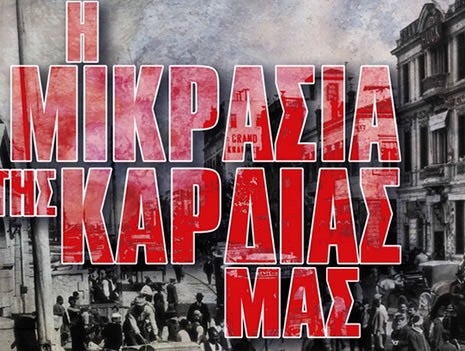 Minor Asia of our hearts

Three days of remembrance events for Asia Minor Hellenism that includes historical tributes, theatrical events, suggestions and narratives related to the refugee issue, concerts and dance events.
It is an event of remembrance for the refugee families who came and lived in Voula in '22 and who created a dynamic community and distinguished themselves in all the activities of social life of the region.
Through a series of events, the Organization of Sport, Culture and Children's Education of the Municipality (OAPPA) gives the opportunity to the residents and citizens of the city to learn unknown aspects of the greatest possible destruction of Hellenism, and to remember the tragic moments experienced by the Greeks of Asia Minor.
The three-day event for Asia Minor takes place every year in the first half of September in Imion Square, Voula.

The aim of the event was to highlight and promote the island of Megisti, the easternmost tip of Greece and to give it publicity with a positive sign.

The athletes, coaches and organizers as well as the guests, went to the island with the cruise ship "Aegean Paradise". 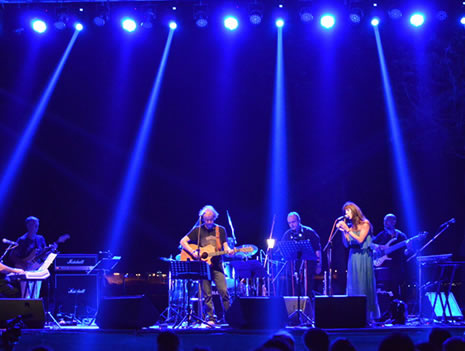 The Mediterranean Festival of the Municipality of Vari Voula Vouliagmeni, entitled "A Sea of Songs" takes place on the beach-port in Varkiza.
It is a three-day event aimed at the spectators to be introduced to the magic of the Mediterranean, as reflected through flavors of traditional products, wine tasting nights and musical characteristics of its regions.
It takes place on the last weekend of June with 2 major concerts, with leading performers of the music scene and important orchestras/bands with the background of the Saronic Sea, in one of the most beautiful spots of Attica, the Athenian Riviera and specifically the Varkiza Square.
The festival is under the auspices of the Region of Attica and is free for the 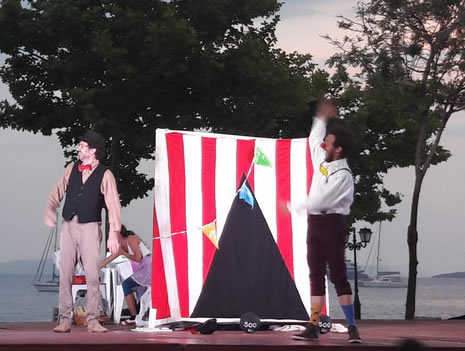 The children's festival of Vari, Voula, Vouliagmeni usually takes place in mid-June on Varkiza square, with free admission for the public.
The Municipality of Vari Voula Vouliagmeni is organizing a festival dedicated to children.
With fun and imagination.
With fairy tales, theatrical performances, actors, visual arts, painting, gardening workshops, interactive games, folk tales telling, children's literature writers presentations, sticks, gifts and many surprises.
According to the organizers, the festival aims to familiarize the children with the culture, the environmental awareness by doing creative activity by the sea. 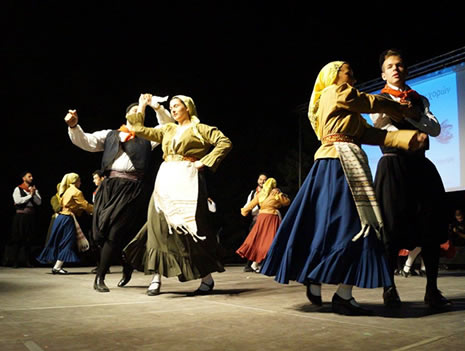 Festival in Vlachika of Vari

The Festival in Vlachika of Vari (Dilofos) is organized at I.N. Peter and Pavlos in Dilofo Varis.
It is a musical journey in the tradition and dances of Greece from Thrace to Crete, from the conakia of Sarakatsana to the Aegean islands
The city of Vari honors its local tradition, remembers the wandering of the Sarakatsana and their establishment
The Festival is free for the public 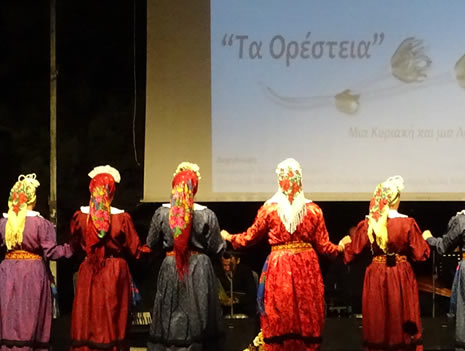 The event, titled "Orestia", takes place at the yard of the Prophet Elias Chapel in Corby, Vari.
"Orestia" is dedicated to the memory of the dancer Orestis - Konstantinos Mylonakis who was tragically killed on July 20, 2011. Orestis was an honors student in the Department of Biology at the National and Kapodistrian University of Athens and lost his life by volunteering at the Samaria National Park.
The University of Athens, honoring his memory, established a scholarship in his name and, in an announcement to an international scientific journal, gave his name to a new species of plant that was discovered in Parnon just before Orestis was lost. The plant was named Allium Orestis.
The theme of the Festival is the dances and songs that traveled over Apeliotis, the wind of the East, to come and rest gently next to the illuminated cross of Prophet Elias on a July night.
The Festival is being co-organized with the Organization of Sport, Culture and Childhood Education of the Municipality of Vari, Voula, Vouliagmeni. 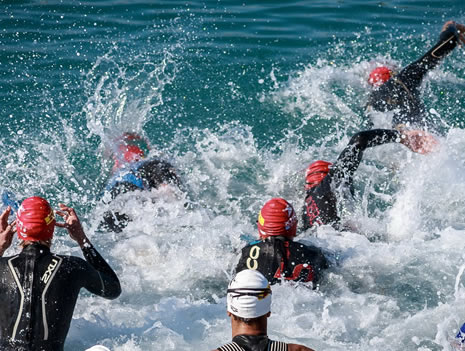 More than 200 men and women, more or less experienced triathletes swim in the turquoise waters of the spectacular Vouliagmeni coast and follow the 2004 Olympic trips in a revival of the highlights of the Athens Olympics!
The Swimming - Cycling - Run Sporting Event aims to revitalize the triathlon track at the 2004 Olympic Games.
It has tourist, cultural and developmental character as it does not participate in the national championship as an event.
It is under the aegis of the Ministry of Shipping, the Municipality of Vari - Voula - Vouliagmeni and the Dutch Embassy.
Running and swimming are sports that suit Greeks as they are an extension of our natural movement. The bike is a modern and eco-friendly way to travel. 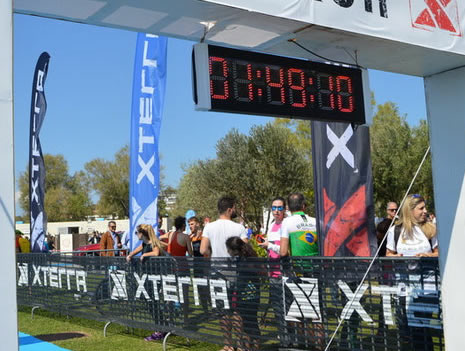 XTERRA is a leading Off Road - triathlon & other off - road sport, with events in more than 25 countries around the world.
The XTERRA Off Road triathlon combines swimming with mountain biking and mountain running.
The Greek race, part of the XTERRA European and World Championships, enables professional and amateur athletes from around the world to claim $ 15,000 cash prizes and qualifying slots for the XTERRA World Championship final at Maui, Hawaii. /> Although some of the best triathletes, mountain bikers, racers and adventure athletes from all over the world are racing at XTERRA, racing is not just for them.
XTERRA is identified with the idea of teaming up, companionship, adventure, and promoting a healthy and active lifestyle. 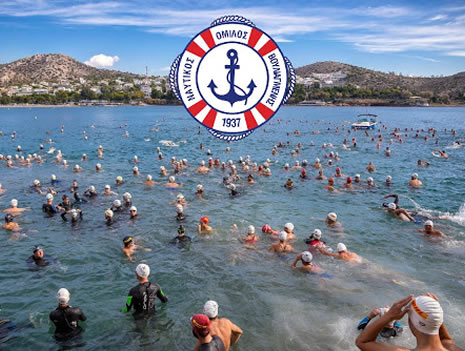 The Winter Swimming Crossing of Vouliagmeni, takes place every November in the magnificent bay of the N.Prostion of Attica.
The swimming event is today the top and largest swimming race of the year, with athletes from every corner of Greece and abroad
Open water swim race which includes three distances, 5000m, 2500m and 1000m, giving the opportunity to athletes of all ages and categories to test their abilities, have fun and enjoy their participation in a well organized and safe event.


Communication.
November
The cost is announced at: www.xterragreece.com/en/other-events/swim-events/xterra-vouliagmeni-swim-challenge/