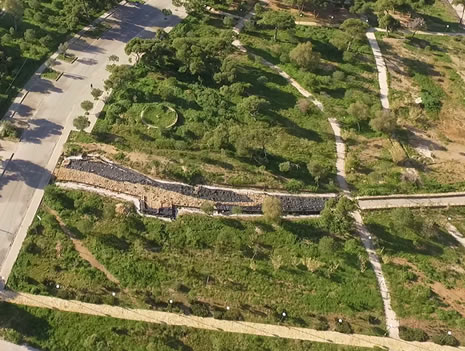 Ancient Road at the "Megalo kavouri"

During restoration works at the beach of Megalo Kavouri in Vouliagmeni, in 2013, a significant part of an ancient carriage road was unearthed. This road connected the center of the ancient deme of Aixonides Halai with its harbor, which was located on that particular coast.
The total excavated length of the road is 300m. Two walls on either side of the road surround and retain the paved part. Τhe road was built on the slope of the hillside, with an E-W orientation, with its coastal part turning southwards to follow the coastline. The width of the road ranges from 1.90m. to 6.10m. It is mainly stone paved, however, wheel tracks are visible in some parts. Openings on the northern retaining wall served for drainage.
The "harbor street", as we conventionally call it, crossed vertically with two other road arteries, one to the north and one to the south. A rectangular ground floor building was unearthed at the intersection of the port road with the north artery, probably serving as a "guard house", enabling control of the passage of wagons and the transportation of goods.
Many repair phases have been identified. A single diversion at the east-end of the road is present, which, based on the type of construction, dates back to the same period as the rest of the road. The ancient road would have been in use from the 4th until the 2nd cent. B.C. based on ceramics and coins detected.
Due to the extent and good state of preservation of the road, concerns were immediately raised about the management of the find. Funding by Mr. Athanasios Martinos for the completion of the excavation research, the preparation of maintenance and restoration studies, as well as the financing of their implementation has been catalytic. The aim of the studies was on the one hand to integrate the ancient road in the contemporary natural environment and on the other hand to promote the hands-on experience of visitors who would walk on it.
So far, all the excavated part of the road, as well as the surrounding walls, have been restored. Yet the reconstruction of the paved part and the management of the surrounding area are still pending. The completion of this work is vital, also setting an example of management and incorporation of antiquities in modern urban life.