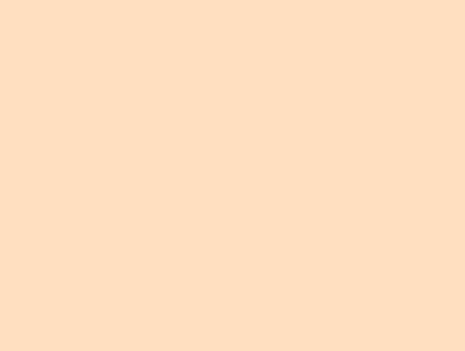 The Parish of Prophet Elias in Corby in Vari was founded by presidential decree F.E.K. 218 Issue 82a published on 20/6/1990 and with the agreement of the Metropolitan Council of the Holy Metropolis of Nea Smyrni No. 128/16-1-1990.
The Church is triune (of Prophet Elias, Agia Varvara and St. Dionysios of Aeropagitos).
According to the study and the construction plans of the Church, which were approved by the ODET, the Church will consist of the semi-ground area and the above it mainly Temple of capacity of about 900 people. The founders of the Church are the members of the Cultural Association of Prophet Elias as well as various famous and anonymous donors.
Today, almost half of this semi-ground space has been completed, it has been properly configured and operates temporarily as a Temple, with the prospect that in the future, after the construction of the upper nave, it will be used as a Cultural Center. Next to the semi-mountainous Church, a small area of about 35 sq.m has been constructed where the catechetical schools operate and various parishioners' events take place.

Communication.
Address: Prof. Iliou 10.
P.C. 166 72, Corby Varis.
Tel: 210-9655.370,Fax. 210-8975.769.
Chapels:
Agia Varvara and Agios Dionysios Aeropagitos on both sides to the left and right of the nave, where during the days of these celebrations, the Holy Services of vespers and Divine Liturgy are performed.
Of Ag. Xenias (feast of May 3, parish).
Evang. Virgin mary
Nativity of Christ,
St. Fanouriou,
St. Nektariou, 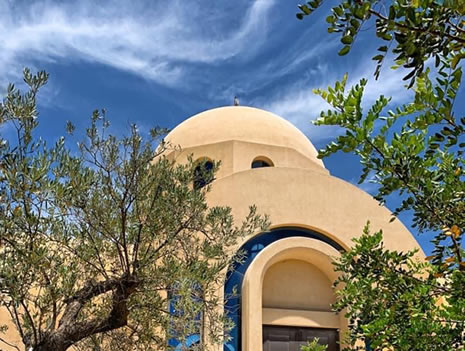 Vouliagmeni The Church of Panagia Faneromeni (Holy Mother) in Vouliagmeni is not another traditional church.
Every angle and detail is designed with a point of view and inspiration, so that from the most traditional base, the Byzantine style that has been cultivated for over a millennium and a half, details emerge that refer more to an architectural avant-garde.
Nothing in this temple is accidental in its place. From the original design to the smallest object, everything serves a single rationale. The architect designed especially for this church the iconostasis, the despotic, the chairs, the bench, the chandelier, the candelabra.
The color of the church, the glass arches above the entrances, the "hidden" spiritual center in the foundations of the church, all show the visitor that there is a lot of evidence to discover, behind the first level of the obvious.
The history of the church begins almost 30 years ago.
The rhythm of the church is free cruciform with a dome. Its surface reaches 580 square meters.
The church was designed so that the visitor feels joy, tranquility, peace and uplift.
It was designed to attract the faithful as a hug. When someone passes by outside, he feels that it is something familiar, that it is calling him.
The trademark of the new church is of course the glass arch above the bronze doors, an element original and characteristic.
The characteristic color of the church was chosen for the sense of age it gives while making the church more intimate.

Celebrates: On The 2nd of February and on the Sunday of All Saints (the Saints Gregory, Theodore and Leo, the Cephalonia Fanentes).

Kimiseos Theotokou (sleeping of the mother of God) Church Voula 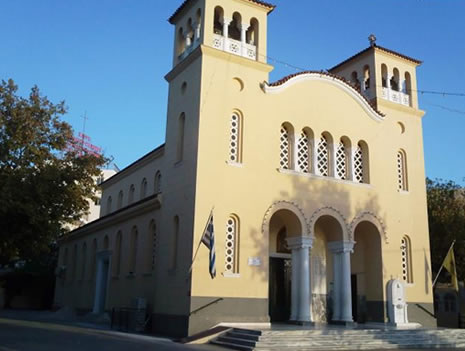 Kimiseos Theotokou (Sleeping of the Mother of God) Church Voula

The Church of the Assumption of the Virgin Mary of Voula initially worked as a shack by the Priest and Founder Fr. Demetriou Kantaras in the year 1938 and then it was gradually built and took the form it has today.
Since the establishment of the new Metropolis of Glyfada (June 28, 2002), the Cultural Center of the Parish temporarily houses the Offices and the Library of the Holy Metropolis.

Kimiseos Theotokou (Σleeping of the mother of God) Church Varkiza 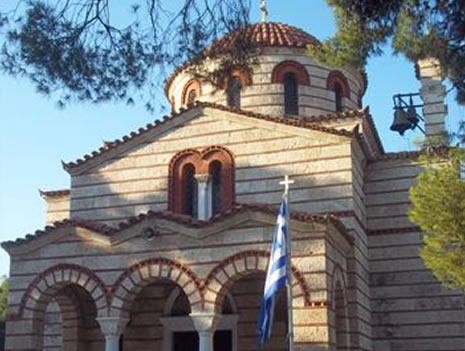 Kimiseos Theotokou (Sleeping of the Mother of God) Church Varkiza

The Parish of the Assumption of the Virgin Mary of Varkiza was founded in 1963 by decision of the Late Archbishop of Athens Chrysostomos (Chatzistavrou), a time when Varkiza was ecclesiastically subordinated to the Holy Archdiocese of Athens, for the needs of the relatively few then permanent residents of the area.
The Church was erected on the site of an older temporary chapel, which had been built by the fishermen of the area. With the care of the first Vicar Fr. Vassilios Michalopoulos and the expense of the pious family Demetriou Delis (whose holiday home is located opposite the Church) began the works of the construction of the current Church in 1964.
The beautiful Church (Cruciform Basil with a dome) was decorated with the greatest attention with hagiographies by Dim. Ritsos and with works of ecclesiastical art such as the icons of the iconostasis of the great hagiographer Pelekasis, the wood-carved templon, the Pontifical Throne, the Shrine of the Ephesian Holy Icon and the Kouvoukli of the holy Epitaph of Russian style.
Note: In the underground area of the Church there is a Chapel of Ag. Dimitrios, where the tombs of the Founders. On October 10, 1974, by decision of the Late Archbishop of Athens, Mr. Seraphim, he was subordinated to the then new Holy Metropolis of Nea Smyrni and on June 28, 2002 to the newly established Holy Metropolis of Glyfada.
The Church celebrates brightly the Assumption of the Most Holy Theotokos on August 15, and the Holy Memory of St. Nicholas myra of Lycia on December 6 (Protector of the Sailors). 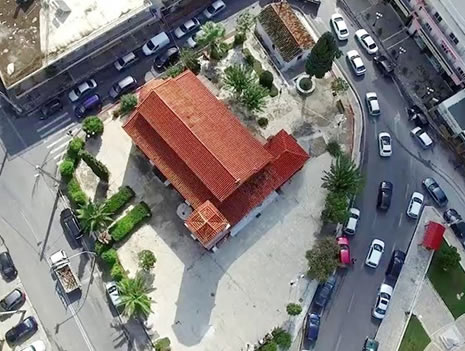 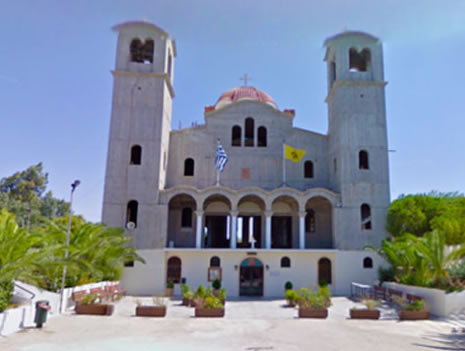 The small size and makeshift construction Holy Church of the Holy Apostles Peter and Paul, in Dilofo of Vari, was built with the help of all the inhabitants of the settlement on a plot of land of the then Community of Vari in 1977.
As a parish church it operated under the 117/9/5/1980, Government Gazette and the 439/1980 Presidential Decree.
Preaching every Sunday. Patient ministry. Request and evening sermon every Wednesday afternoon, Vigil once a week. Hagiography lessons. Pilgrimage excursions monthly. 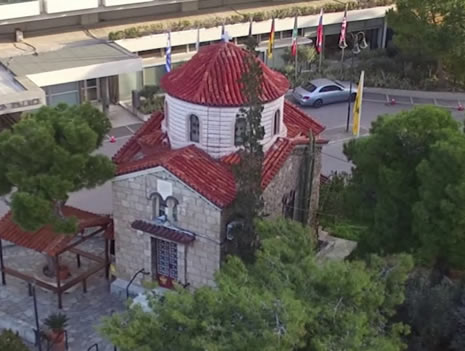 The Asclepieion Hospital began operating in 1920 under the auspices of the Hellenic Red Cross.
In the Hospital, from the beginning of its Liturgy, priests of the Holy Archdiocese of Athens came and performed the Divine Liturgy in the wards of the institution.
In 1958, a chapel of Agios Megalomartyras and Iamatikos Panteleimonas was built with the donation of Garyfalidis Theodoros, professor of orthopedics.
This small Church did not serve the needs of the institution, as it had many problems as a building.
So it was demolished and in its place, in 1996 a new one was built, under the same name, by the founder Mr. Nikolaos Alexias.
On May 11, 2003, the inauguration of the new Church took place, by the Metropolitan of Glyfada, Mr. Pavlos.
Celebrates: on July 27.
Source: Holy Metropolis of Glyfada 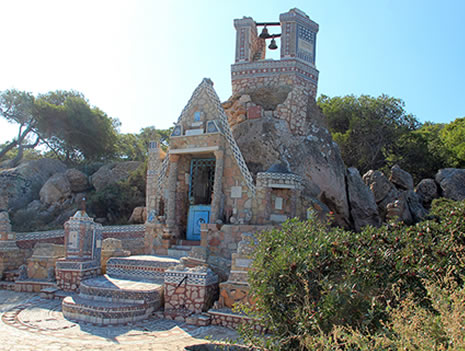 A well "hidden", almost unknown, but also abandoned chapel, is built in 1947 on a rock, on a slope of the neck of Vouliagmeni, almost next to the nautical club.
In one of the most unspoiled spots of Vouliagmeni, on the rocks after the marina in Vouliagmeni, swimmers, hikers and those who pass by boat meet a really strange tiny chapel.
Α large iconostasis of Agios Nikolaos, literally in the rock and with additions of stone, pebbles, marble and other materials, a construction that has created its own legend in the area.
The iconostasis is carved into stone with additions reminiscent of Byzantine church architecture (such as bell tower and enclosure). In the small interior space have been placed a number of images while in a marble slab is inscribed: "Agios Nikolaos. Taker Nick. Foreign painter sculptor 1947".
In four parts of the construction one finds today marble inscriptions, the content of which illuminates somewhat the personality of the artist and the philosophy he wanted to project from his work: "Work is prayer", "Work and love for neighbor is the preaching of Christ", "On the holiday there is constant disappointment" and "Zero profit of hatred and acquisition, everything futility." 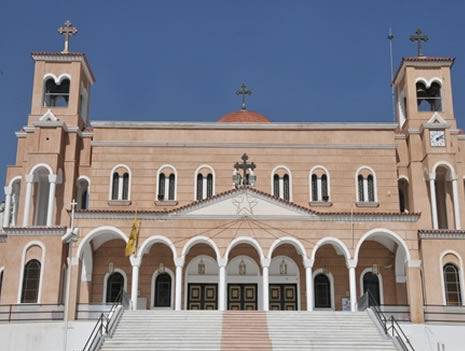 In 1974 a small Christian group, coming from the beautifying Association of Panorama of Voula, having patron Saint Nektarios and under the guidance of the then serving in the Church of the Assumption of the Virgin Mary Voula, Archimandrite Andreas Tsiros, decided to build a wooden chapel to serve the few believers in a corner of the space intended for a church.
The first Divine Liturgy is celebrated on 18/9/76 and the chapel serves the liturgical needs of the faithful for several years.
The parish of Ag. Nektarios Panorama Voulas was approved by 441/5.5.80 Presidential Decree (Government Gazette 117/9.5.80) subject to the Holy Metropolis of Nea Smyrni. The basement was founded on August 17, 1980, by the then Metropolitan of Nea Smyrni Chrysostomos and retained its original form until 1993.
With the 1215/9.7.92 permission of the Directorate of Church Architecture of the Holy Synod, the construction of the superstructure of the Church was approved. The rhythm of the Church is a three-aisled Basil with a dome and a capacity of one thousand people.
With pomp and with every ecclesiastical order, the inauguration of the Church took place on the weekend of 18 and 19 May 2013, by His Eminence metropolitan of Glyfada, Greek, Vari, Voula and Vouliagmeni Mr. K. Pavlou.

Celebrates: 9 November and 3 September and 11 June.

For more information you can visit the website of the church http://www.agios-nektarios.com/index.html 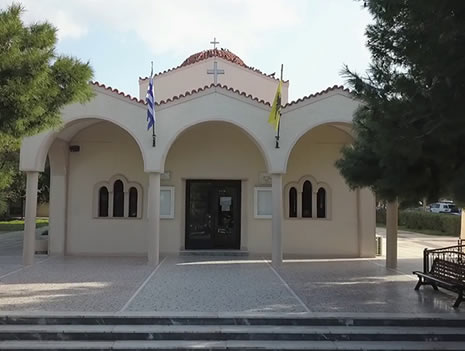 The Church of St. John in Voula is located in the area of the commercial center of the city (the old residents call it Ano Voula), in the park between the two avenues, the coastal one, which is the continuation of Poseidon from Piraeus and Vouliagmeni, from Athens.
It is the only Church of St. John the Baptist, along the entire south beach of Attica.
In the early 1950s, the few permanent residents of the area, who belonged to the oldest Parish of the Assumption of the Virgin Mary in Voula, on the initiative of the Association for the Restoration of Landless Kropia (S.A.A.K.), founded in this area and erected the Chapel in the name of "St. John the Beheaded", which is first operated during its Feast, on August 29th of the year 1956.
Later and while the population of the area is increasing, it becomes a Parish, with the first permanent Vicar being the late Fr. Panagiotis Spyropoulos, who in the 1970s expanded the Church twice, until its current form.
The church is equipped with the necessary, from the offerings of the faithful and is embellished with hagiographies mainly of the late Painter - Hagiographer Demetriou Ritsos, parishioner of the Church, as well as his collaborator Antonios Lampadakis, who continues the completion of the project.
The iconostasis, offered by the late parishioners, the Gournas couple, is placed in late 1992 and the church has been air-conditioned since the mid-1990s. The offerings of the ever-increasing believers are important, given their desire to maintain their anonymity.
The parish of St. John Voulas, organized nowadays with two and at times three priests, with excellent collaborators, chanters, hardworking and honest commissioners, neokoros, philotimo catechists, etc., proceeds spiritually, with the help of the Saint. Moreover, the Holy Baptist offers during the Ecclesiastical year so many opportunities for His Feasts: Conception (September 23rd), Genesis (June 24), Synaxis (January 7), Beheading of His Holy Head (August 29th), First & Second Finding (February 24), and C' (May 25), during which we have the opportunity to honor Him with Divine Liturgies and Vigils.
The priests who serve today in the Church, provide opportunities for spiritual training, with frequent Speeches, breakfast offerings and discussions of theological content with older and younger parishioners, but also with pilgrimage excursions, throughout our country. The submission of an offering of the parishioners of the Church, relieves our fellow human beings in need, and helps the unhindered operation of the Parish, which has as its first purpose, the sanctification of its members, to the glory of our God in the Trinity, always with the warm embassies of our patron Saint.

Published in Εκκλησίες
Tagged under
Be the first to comment!
Read more...
StartPrev12345678910NextEnd
Page 1 of 19
FaLang translation system by Faboba