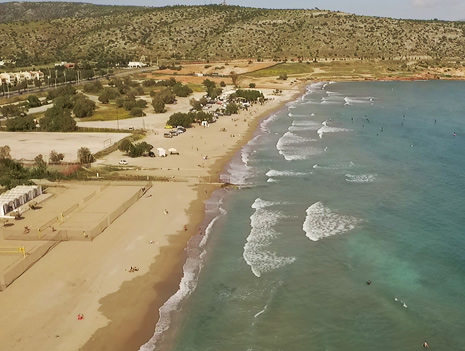 For many Athenians this beach is their go-to place.
This route with sweeping golden sand and sparkling sea with Seashells as far as the eye can see, it’s easy to understand why coastal walking trips are more popular than ever.
The coastline lay softly under the early morning light, like a freshly baked cookie already nibbled. The celestial fireball blinds you as it emerges, rising like a glowing medallion on the distant horizon. Topaz sunbursts of light smash against the calming blue of the ocean, lighting up the sea into cylinders of flax gold light. Crashing against the shore, small waves wash the night's debris onto the land. Untouched golden sand covers the floor as far as your eyes can see. Soothing, a gentle sea breeze rustles through your hair. The smell of the salty sea rushes through your nose as you breathe in fresh air.
Your eyes will see continuously the left overs of children’s sand castles and your lungs will be filled a salty sea air while listening the percussion of waves.
Upon this primrose sand, the hue as gentle on the eye as a vintage photograph, there is a steady warmth from the grains. The sand is the most gentle hue of gold, almost earthen and muted, the humble star of the scene.
You will love this beach. 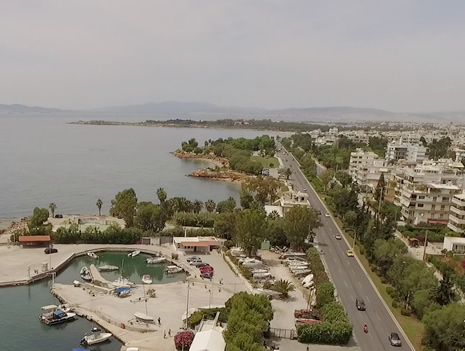 The walk between the tram terminal (Asklepieion Voula stop) and the City Hall of Voula is located along the coastline, is about 2nd meters, mainly flat and safe.
All the way there are benches for rest and the playground NOTOS
This itinerary is the perfect way to discover the hidden coves and deserted beaches of Voula’s Coastline. This Voula itinerary we mapped out is just over 2km and starts at the terminal tram station and continues south along the shore until Town Hall.
This is a very scenic path with the sea continually visible and with interesting rock formations along the beaches below. There’s always something new to see, a fresh wonder around the next headland. On any summer day the sand would be entirely obscured by vacation goers in their multicoloured board shorts and bikinis, sunbathing and getting burnt.

The walking on this place you can make you fall in love with life, especially when your eyes capture the scene of the dazzling sand that sparked in the golden sunlight.

If you walk with bare feet on the beach, the sand is softly golden with just the right comforting warmth. To rest on the beach feels like a cosy hug, one only matched by the sunshine filled sky.
One of the most beautiful times is towards the end of the day. The area of Voula has a wonderful sunset. 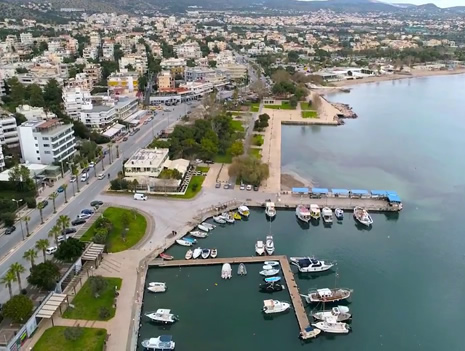 The route on Varkiza gives the walker unique images.
Starting from the square towards Vouliagmeni the visitor has the pleasure of walking in one of the most beautiful places in Athens.
Along the entire length you move next to the sea on an alternating interchangeable level route with large sidewalks for the most part which reaches via a path to the ports of Vouliagmeni.
With its development in 2019 it became more modern while with the widening of the sidewalks and pedestrian crossings more useful and safe for its residents and visitors
The square also has a sculptural landmark, the work of the sculptor Kostis Georgiou under the name Taurocathaption.
The sea unfolds to its left while its steps take place in a clean and green square.
It's worth a stop at her little port. You go down to the fish auction where the fishermen's stalls are full of mullets, cuttlefish, marids, gopes...
If your route is in the morning hours around 9 you will find a lot and good fish.
Continuing towards Alkyonides and the Island you will find many small lacy beaches while the trees on the sidewalk to the sea will generously offer you their shade if your walk is during a hot day. 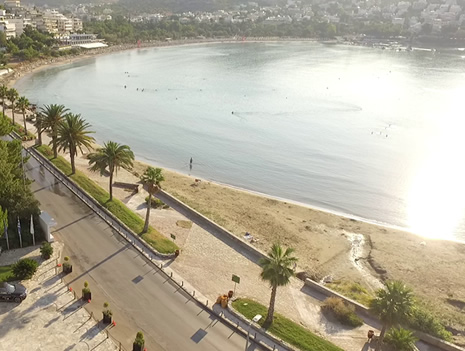 This is the shortest of our routes, but perhaps the most famous.
Just 1.5km around the Vouliagmeni Bay will leave you wanting more. You don’t really need a map for this one because you can basically see your path the whole way around the semi-circular bay. If you start near lake Vouliagmeni, you’ll be higher up with a great view of the bay, the beaches and the water sports. This is the winter surfing hot spot for the Athenian surfers.

Continue on down towards the main beach and curve around toward the point. You’ll pass by many Athens Riveria legendary restaurants and the famous Astir Palace Resort.

Walking near the beach and depending on the weather, you will feel the opera of the sea hearing the wave-music. It’s like walking through an airy route of sky and sound. The mermaid’s call of the waves reaches out to you and you have to resist its siren call to enter.

The beach that you are walking on is an enchanting paradise. It is half-moon shaped and there are no heaving waves to be seen, merely wave-grooves in the sand.The sea is a cerulean-blue gown and the beach seems dipped in earthshine-gold.

The pulsing heart of the sea causes a gentle swell and the waves cascading onto the shore have that ancient alchemy of purr-and-pound. When they uncoil, it is like an old, vellum parchment is unrolling in front of your eyes scripting a secret message.

If you could read the script, it would probably say just two words a hundred, hundred thousand times; never leave. 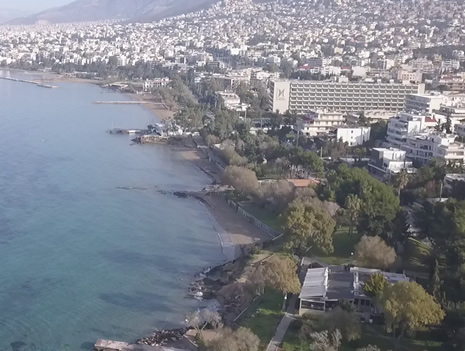 After Town Hall, coming in off of Poseidonos and turning right at Ilios street (Sun street) it starts a 1.72km route along the Kavouri coast. This path takes you through a generally residential area dotted with luxurious hotels and coastal dining.

After about 600m (near the Divani Apollon Palace) the beach will appear to end- keep going and you will soon see where the path continues along the coast.

The middle part of the route is higher up from sea level and offers great views and magnificent views of the waters.

You eventually will end up in sandy beach area. The coastline curved as if drawn by an artists hand, the golden sands making a thick band between the waves and the vegetation beyond.
You can enjoy a blue sea, a pale yellow sand , and a fierce sun, hot and yellow.

If you look around you will admire the feng shui perfection of the beach. The palm trees are lined in serried rows and dip their heads in obedience to the sea. In combination with pine trees they have an Eden-green beauty.

In this beach, your nostrils are tantalised by its richness. It is neither the sea smell of the salty waves nor the earthy cologne of the vegetation that you smell. It is much more immediate, much more familiar that that.

In Megalo kavouri beach you always want to take another and another look and commit all of them to your memory. You will wish to have the ability to bottle the scent and have seashells to touch. You will recall the feel of the sand between your toes and the clarity of the sea and is definitely a place you will visit in your dreams. 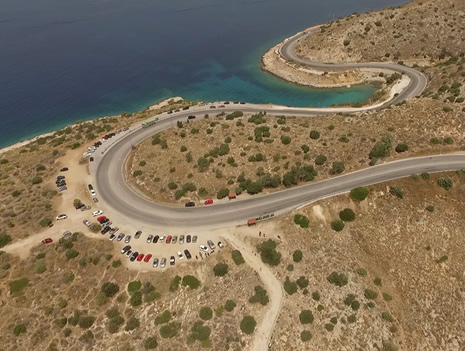 Continuing the coastal road that connects Vouliagmeni with Varkiza, a series of wraps of the natural landscape unfold with many small coves. An area well Known as Limanakia, or ‘small ports’, are little coves with rocky beaches and blue-green waters, Is particularly popular among Athenians. The area is accessible only by foot and requires care when navigating through the steep slopes of the rocks overlooking the coves.
There, listening with both an open heart and ear, you can hear the waves crashing against the nearby rocks. These rocks have been the go-to place for many bathers since they were kids. They used to jump off of it and into the water, or sit on it and read their favorite book.
Waves crash over the rocks spreading it's lacy foam like the edge of a petticoat. Depending on the orientation of wind, the salty air may lay thickly on your tongue and fill your nostrils. You will never taking your eyes off the empty horizon where blue sea meets blue sky. You will enjoy the faint taste of salt.
The air carries a faintly delicious perfume with it also. It is as if a vial is being slowly uncorked, revealing a galaxy of otherworldly scents.
The coastline is brilliant in the morning sun with it's chalky white ribbon of cliffs, jagged and folded, shrinking into the distance. Below the cliffs were beaches of rocks made rough by the barnacles upon them.
Ideal for relaxation and diving, Limanakia are a favourite destination of the young and scuba-divers.
You should know that the same picture-perfect scene you are devouring with your eyes may be very dangerous for many an unwary mariner. The fool-strewn sea floor is not to be underestimated, however sensuous it may seem above the surface.